semiosphere. we aren’t done designing it yet, so it may not be ready to play.

the game is set in the

semiosphere: the sphere of all signs, and their processes that operate with one another; the domain of all signs that contribute to and ultimately define a culture. it is a realm of ideas, a psychic and causal force that shaping our politics, communications, society, and planet.

there are four major influences at place in this space between minds: humanity (hearts), calamity (diamonds), technology (spades), and nature (clubs). your job is to collect ideas (cards) from various zones to build a cohesive philosophy. each turn, you will play a card from your hand into one of the four zones. you’ll either germinate an idea (discard a card into a zone), incubate an idea (combine your card with other cards in a zone), or culminate an idea(collect cards in a zone that match the value of the card you’ve played). at the center of the board, the four influences create the zones, which have restrictions on which actions can be taken. however, the location of the zones change! at the end of each round, the ideas that make up your philosophy (collected cards) are scored according to their value to humanity. the goal is to be the first player with 15 or more points. 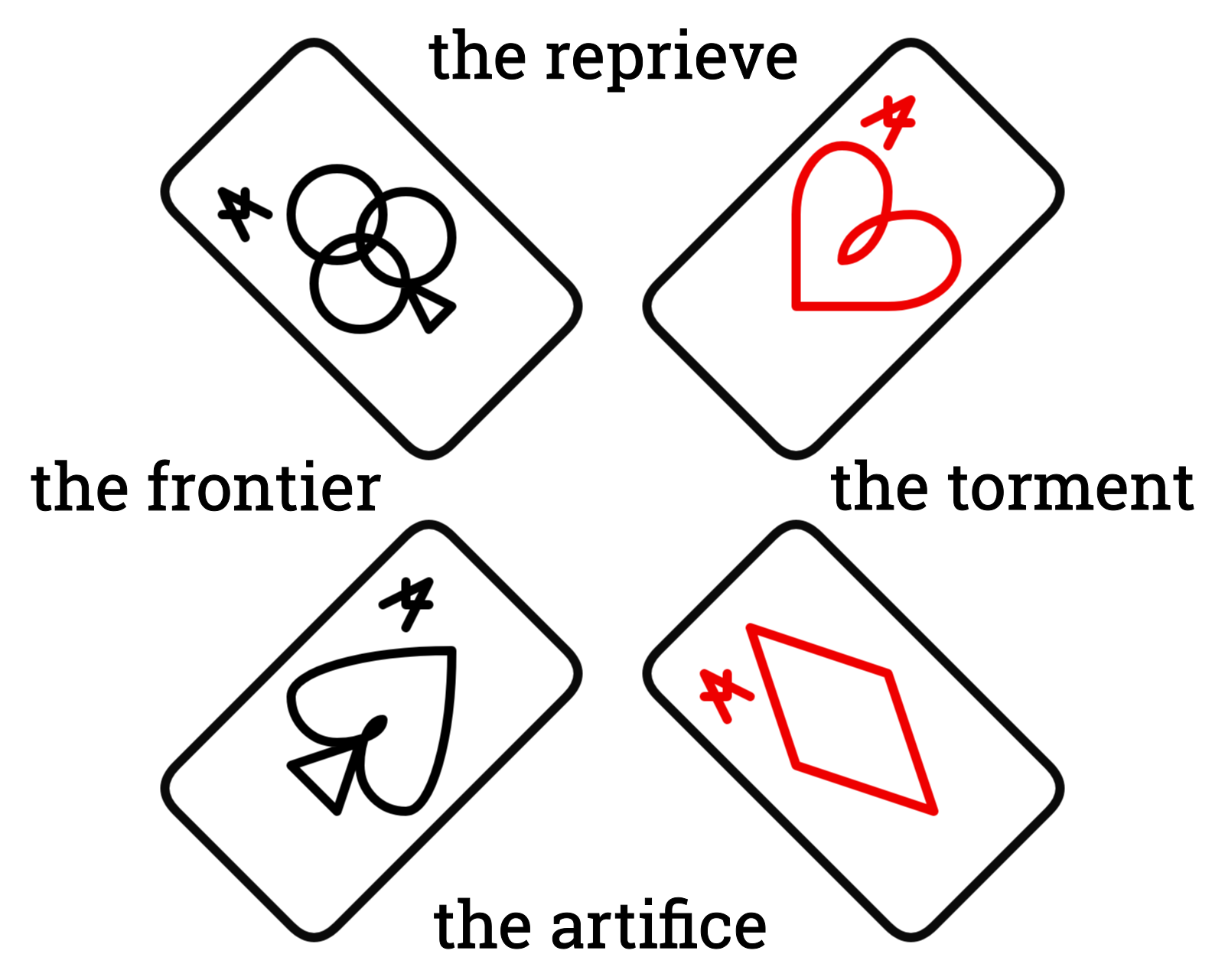 note: it doesn’t matter which cards are next to each other, as long as they’re opposite the right card.

object of the game

the goal of semiosphere is to be the first player to ear 15 or more points. points are tallied at the end of each round. generally, 2-4 rounds are played. after each round, points are calculated:

play begins to the left of the dealer, continuing clockwise. a player must play one card each turn and perform one of the actions: germinate, incubate, or culminate. see below for more information on actions.

there are four great influences in the semiosphere, each represented by a suit

each turn, the player make take one of 3 conceptual actions:

in practice, you will play one card from your hand to one zone, as long as that zone permits it.

incubation is the trickiest of the actions, and the hardest to master as it involves two cards: an active card, and a passive card.

as you play, these axes will flip, moving the zones around the board each time. where two influences touch, they create a zone. all zones have one action restricted, except the frontier.

the torment represents humans at odds with their natural environment: rising tides, fires, famines, droughts, and crises plague society. times are tough and no one is able to come to a conclusion of what to do to get out of the torment. new ideas are being germinated, and many are incubating, but there is no culmination to save us from the calamity.

restriction: players may not culminate ideas in the torment.

the reprieve represents willful ignorance and temporary abundance. there is enough food to go around, and nature provides, at least for some - but it won’t last forever. are people just sticking their heads in the sand when it comes to the looming threats? simple ideas can come to fruition here, but there is no room for incubating ideas that might rock the boat.

restriction: players may not incubate ideas in the reprieve.

the artifice is the union of humanity and technology. man’s hubris has led him to be abundantly reliant on technology, past the point of no return.

the frontier represents the positive combination of technology and nature - a time for challenging the status quo and seeing what else might be possible. a pivot point in history, but also a time of great vulnerability and high stakes. anything goes.

semiosphere is inspired by: